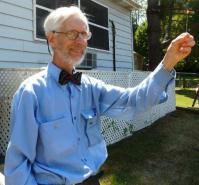 Sheldon Howe is a remarkable man. Anyone who travels between Catonsville and Ellicott City has probably seen him on his way to or from work or church. You see, Sheldon doesn’t drive, but that has never deterred him from getting to his destination. In fact, for 37 years, Sheldon has always found his way.

There are only a few things in life we can absolutely count on… and, for those of us who know Sheldon, one of those things is his commitment to get things done. You can rest assured that if Sheldon says he is going to do something, it will get done. His resourcefulness has set him apart from the crowd and has set the stage for him to live a life filled with purpose and meaning. He has made a difference in his church and he has made a difference at Linwood. Jeanne Simons, Linwood’s founder, knew Sheldon’s mother, a professional in the mental health field. Miss Simons knew immediately that Sheldon and Linwood would be a good match. She offered him a job and a place to live.

I have worked at Linwood for almost as long as Sheldon. In fact, Sheldon was one of the first people I met at Linwood. As a student intern in the mid 1970s, I was walking through the old building late one evening and came across this man with long brown hair and a scraggly beard, cleaning up in one of the classrooms. We acknowledged each other and I went on my way, not really thinking much of the encounter, except to think to myself that this man was indeed as interesting as the old building itself. I was right.

For 37 years, Sheldon treated the old building like it was his own. And he conducted his affairs with the students and staff like they were his family. Sheldon tended to the gardens, picked up after people, and placed himself last in the lunch line, making sure that everyone was fed and the tables were wiped off before he sat down for his meal.

Sheldon is a highly educated and competent man. Through the years, he found his niche in a number of areas. He had a keen and objective eye. Any good educator will tell you that one of the linchpins of a successful functional analysis is objective observation. When we needed a good solid objective observation with no opinions or interpretation, we would ask Sheldon to do this for us. He would go into a classroom and focus his attention on the student in question. We would end up with pages of a pure, objective written dissertation. During staff meetings, Sheldon was the person to voice thoughtful (although sometimes loquacious) comments and questions, eliciting discussion that benefited most of the people in the room.

Sheldon loved his work. For the 29 years that we travelled to Camp Maria, Sheldon was the arts and crafts teacher every single year. He spent entire days and evenings in the recreation hall, working with the kids during the days and tending to the individual projects in the evenings. There were many a blistering afternoon when we had to tear him away from the rec hall and bring him to the swimming pool to cool off or to the dining room to eat lunch or dinner. Sheldon continued conducting arts and crafts projects with the students until the day he retired.

I’m not quite sure if Sheldon belonged to Linwood or if Linwood belonged to Sheldon. I am sure that we will miss him.