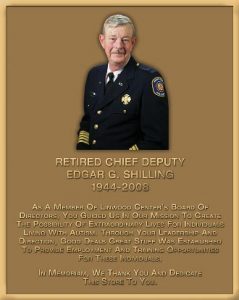 In 2006, Linwood Center opened up its first store, Good Deals Great Stuff, and dedicated it to the late Chief Deputy Edgar G. Shilling, who passed away in February 2008. Ed served on Linwood’s Board of Directors for the last six years of his life. During his tenure on the board, Ed guided us in so many ways. In addition to his invaluable work in our human resources department, he provided oversight on all facilities issues, focusing on the safety of our school, dormitory, 14 homes throughout Ellicott City, Columbia and Catonsville, and our store at that time. In fact, he was instrumental in guiding us in all facets of getting the store up and running. He provided his unique insights as we developed the concept for the store, selected a site, obtained permits, fitted out the store and prepared for our grand opening in November 2006. Until his passing, Ed visited the store regularly and worked with our staff to ensure its success and remind everyone of our mission to create the possibility of extraordinary lives for people living with autism. Good Deals Great Stuff was the precursor of our current store, Linwood Boutique, which provides employment and training opportunities for many of our program participants, individuals who, because of their significant disabilities, are unable to find jobs and training opportunities anywhere else.

On September 27, 2008, we celebrated Ed’s life with those who knew and loved him. The Elkridge community—including the Fire Department, the Police Department, the Howard High School Marching Band, the County Executive, a representative from Senator Barbara Mikulski’s office, a number of elected officials, Linwood staff, Board of Directors, program participants and Ed’s family—attended and participated in a wonderful event that paid tribute to this remarkable man. We dedicated our store to Chief Shilling with the unveiling of the plaque depicted above. Although Good Deals Great Stuff is closed, it served as the guide for all current and future employment and training programs Linwood provides to the autism community. We will continue to proudly display Ed’s plaque prominently in our store  for all to see.